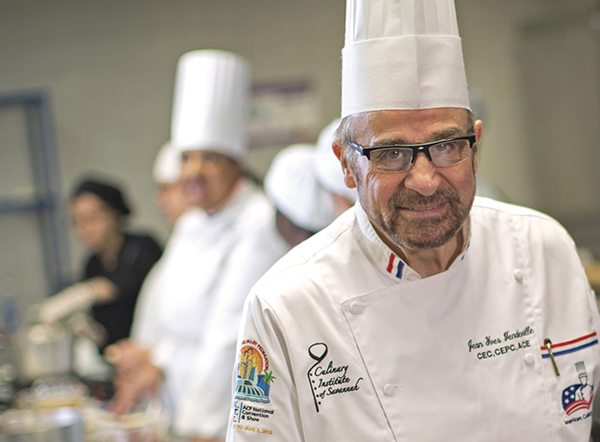 Chef Jean-Yves Vendeville, department head of the Culinary Institute at Savannah Technical College, will be honored at the 14th annual Opportunity Award Gala, December 1, 2017. The event, hosted by the Savannah Technical College Foundation, honors deserving civic leaders in our community for a lifetime of service in creating and enhancing opportunities for others to succeed.

This year, the STC Foundation honors Vendeville for his leadership and commitment to improving the quality of life in Savannah. From more than doubling enrollment for culinary students to developing a baking and pastry program for the state of Georgia to earning the top educator in the U.S. by the American Culinary Federation (ACF), he has created opportunities for others in the Savannah area and beyond.

In June 2017, Vendeville received the French academic palms, the oldest non-military honor given by his home country, France. This high honor is similar to being knighted. His ceremony to receive the palms will take place at the Gala on December 1. French Academic Palms recognize those who have rendered eminent service to French education and have contributed actively to the prestige of French culture.  For those who are named to and promoted in the Order of the French Academic Palms (l’Ordre des Palmes académiques), this esteemed distinction acknowledges their merits, talents, and exemplary activities.  He will henceforth be known as Chevalier De L’ Ordre Des Palmes Academiques.

He was named 2012 Instructor of the Year by the Technical College System of Georgia and 2012 Chef Educator of the Year by the Low Country Chapter of the ACF. He has led student teams to win four ACF Southeast Regional Championships – in 2010 in the Hot Food Team competition and back-to-back wins in the Knowledge Bowl competition in 2011 and 2012 and recently in 2015.

At the 2012 ACF Southeastern Regional Conference, Chef Vendeville received the top ACF award – the President’s Medallion. This award is the ultimate honor for a lifetime of commitment and service to the standards and excellence ACF exemplifies. He has achieved his ACF Lifetime Certification as an Executive Pastry Chef and holds a Lifetime Certification as an Executive Chef from the Chef Association of America.

The Culinary Institute of Savannah ACF-accredited culinary arts program has been described as the “best in the U.S.A” by its ACF accreditation review board. According to his committee chair, the Culinary Institute of Savannah, offering ACF-accredited diploma and degree programs in culinary arts, has gone “well over and above the standards and expectations for a technical college teaching facility.” The committee recommended that the program receive the maximum accreditation time of seven years, when the average is three years.