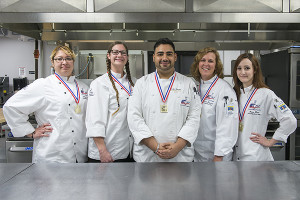 “Our team’s win on a regional level shows the excellent culinary education Savannah Technical College provides,” said STC Culinary Arts Department Head Chef Jean Vendeville. The team of second-year culinary/baking and pastry students has been training twice a week for the past six months. “This team has become as good as they are due to their hard work. We look forward to the national competition,” said Vendeville.

To earn a gold medal in the Knowledge Bowl a team must score an average of more than 600 points in two of the five games in the competition. This team was undefeated after competing against five other teams in the Southeastern region.

First held at the 1992 ACF National Convention in Washington, D.C., the Baron H. Galand Culinary Knowledge Bowl is the brainchild of Carol Kelly, a member of the Nation’s Capital ACF chapter and a culinary instructor. She used the competition format to test her vocational high school students. As the competition grew, it was named after former ACF President and long-time advocate of apprentices and junior members Baron H. Galand, CEC. Today, the competition includes sensory questions, hidden pictures, and of course challenging culinary, baking, nutrition, sanitation and math questions.

The Culinary Institute of Savannah offers ACF-accredited diploma and degree programs in culinary arts and has been described as the “best in the U.S.A” by its ACF accreditation review board. Previous STC student teams won three consecutive ACF southeast regional championships – in 2010 in the Hot Food Team competition and back-to-back wins in the Knowledge Bowl competition in 2011 and 2012.

Under the direction of Vendeville, the American Culinary Federation’s 2014 Chef Educator of the Year, the College offers associate degrees in Culinary Arts along with Baking and Pastry. The Culinary Institute of Savannah has earned distinction as one of the top four culinary programs in the country according to the American Culinary Federation (ACF). Vendeville has assembled a top-notch team of faculty, who have each earned national ACF certification under his leadership. For more information about STC Culinary Arts visit: www.facebook.com/ChefJeanVendeville.